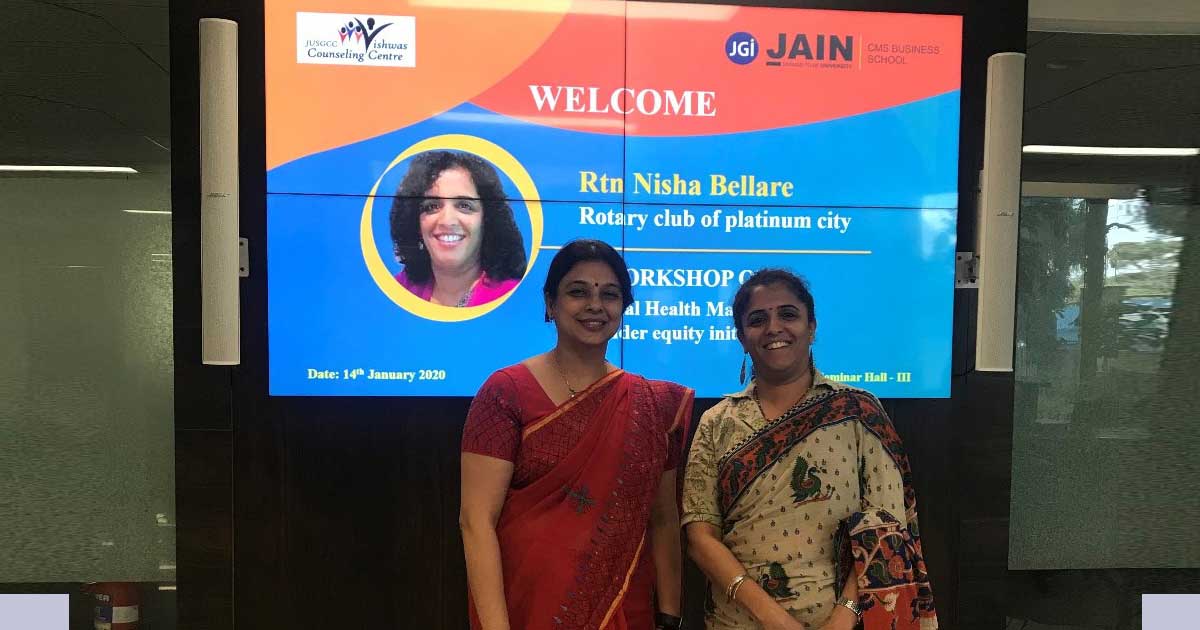 Menstrual hygiene management (MHM) is an essential aspect of hygiene for women and adolescent girls between menarche and menopause. There can be chances of health issues that are caused due to the lack of menstrual hygiene. Certain menstrual products used can also pollute the environment to a large extent. To promote a hygienic menstrual health and create awareness on the right way to maintain menstrual health management, Vishwas, Counseling center of Jain (Deemed-to-be University) organized a guest session on menstrual health management on 14 January 2020 at CMS Business School. Rtn Nisha Bellare, Rotary club of platinum city and Rtn Latha Krishna, President of Rotary club Basavanagudi were the two key resource people of the session. The dignitaries present in the session were, Dr Uma Warrier, Chief counselor of Vishwas, Jain University, Rtn Nisha Bellare, Rotary club of Platinum city and Rtn Latha Krishna, President, Rotary club of Basavanagudi. Around 290 students attended the session along with women from the admin staff and supporting staff. A total number of 320 attended this awareness session. They showed immense curiosity to know the effects of the products they use. The student Emcee began the awareness session by briefing the motive behind the awareness session followed by introducing Rtn Nisha Bellare and Rtn Latha Krishna. The audience were then addressed by Rtn Nisha Bellare which was translated into Kannada by Rtn Latha Krishna for to make sure the support staff could understand it better.

The session threw light on how sanitary pads affect the environment by clogging drains and are dumped in lands for years together. Rtn Nisha Bellare with basic calculation explained that a woman attains about 420 periods in her lifetime which means that each woman uses a total of 4200-6000 sanitary pads. With further research, she said that every sanitary napkin takes about 500-600 years to decompose and each pad used is equivalent to 4 plastic bags. She mentioned that a city like Bangalore produces 90,000 kgs of sanitary waste per day, which was way beyond the audience’s guesses. Students were awestruck to hear this.Rtn Nisha along with explaining how it affects the environment also explained in detail about how sanitary pads affects health. She began with the advantages and disadvantages of using a sanitary pad. She pictorially represented the chemicals that are used in order to make sanitary pads increase its ability of converting liquid to gel. Some of the materials included, chloromethane and chloromethane which causes infections, rashes and conditions like yeast infections and vulva dermatitis. She also threw light on the people who clean, pick and unclog sanitary pads and explained how it will affect their health by also making a point that it is inhumane to put other people through this.

The speaker also provided different alternatives that can be used to improve menstrual hygiene and create a safe environment. She spoke about cloth pads and detailed the audience about the ways to use it, carry it, sterilize and maintain it. Alongside, she put up a simple calculation as to how much we would invest on a cloth pad which was about 5-8000 in 10 years and was way lesser as compared to the investment on sanitary pads which was about 12-45000 in 10 years. The second alternative given was using a menstrual cup. The material with which it was made, the way it works, the ways to use it and the ways to sterilize it was explained and the cost comparison was given for this as well. It was leant that one menstrual cup can be used for 10 years which means the cost on menstrual cup in 10 years would be 1000-3000 rupees. There was further detail given about different sizes and textures of cups available in market and the audience were educated on how to choose the right one. A demo on the ways to use these alternatives was also given to increase the clarity of understanding among audience. Audience asked questions and clarified their doubts. They evidenced sustainable menstrual products and interacted with the speakers further. A student volunteered and shared her experienced with Rtn Nisha Bellare and thanked her for taking an initiative towards the environment and sustainable menstruation.