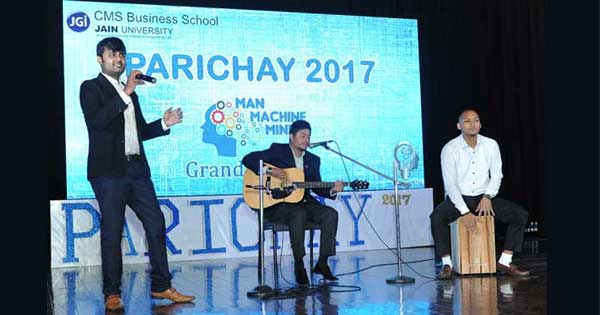 CMS Business School, Jain University organized an annual intra-college fest 'Parichay-2017' based on a theme of 'Man Machine Mind'. The fest was organized to welcome the MBA batch of 2017-19 and make them comfortable with the new environment.

The five-day long fest witnessed active participation of more than 400 students across various verticals including cultural activity, creating a platform for new entrants to showcase their talent in various activities such as Best Manager, Business Quiz, and Cultural Activities etc.

With the lighting of lamp, the fest was inaugurated on 14 August 2017 which was followed by introducing the participants of each activity with inspiring videos of respective activity emphasizing its significance.

The second day of the fest was ethnic day wherein, the students showcased their tradition and culture through fashion show which stole the limelight of the program, creating the festive atmosphere among spectators. During the fest, tasks were given to the participants of all verticals to assess their endurance, patience and stress management skills.

On the third day of the fest, Finance, Marketing, and Best Entrepreneur verticals had their finals while other participants were battling to mark their position in the grand finale.

The Grand Finale took place on 18 August 2017 which included the final round of Business Quiz, Best Manager and CMS Got Talent.

The event witnessed huge success with the unveiling of the most awaited CMS Business School's intercollegiate management fest b Cranium.

The fest concluded with a vote of thanks by the organizing committee.