HR Conclave on Diversity and Inclusion 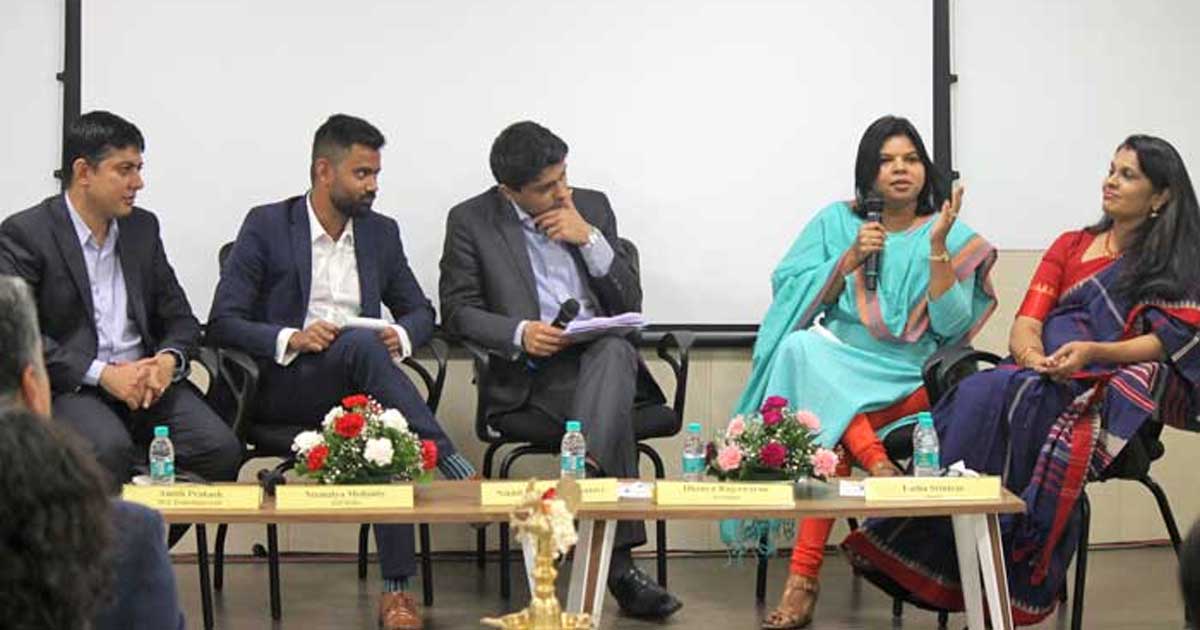 CMS Business school organized HR Conclave on Diversity and Inclusion on 21 Sept 2019. The learning and experience is greatly enhanced when the academic rigor in classrooms is supported by different forms of active learning. Students are introduced to why is diversity important in the workplace and how are organizations missing out if they don’t get the gender balance right.

The main aim of the event was to make the audience (industrialist, students, and faculty members) aware of the need of diversity and Inclusion to make the employees engaged and more productive in modern time. There were seven speakers from different background and expertise. The conclave was structured into two parts: Two keynote speeches to sensitize the audience on Diversity, Inclusion and unconscious bias. Panel discussion members and the moderator of panel discussion to elaborate the diversity and inclusion practices of their organizations and how do they drive the programs and what are the challenges and business implications of the same. Dr. Uma Warrier talked about the emergence of diversity and inclusion and set the tone for the conclave by divulging some statistics on increasing trend of gender diversity from a mere 7 % ten years ago to a 29 % according to Grant Thornton reports 2019. She expressed the need for all to understand the business significance of D and I initiatives by quoting some organizations achieving 48 % increase in productivity by including D and I practices in their organizations.

Resource Person:
Mr. Jatinder Salwan - Head – HR SG GSC Chennai Center, Talent Acquisition and HR Operations
The first speaker of this event was Mr. Jatinder Salwan who started the session by introducing the different traits of diversity such as visible (age, culture, gender), invisible (family status, values, belief, life expectancy) and visible or invisible (veteran status). He talked about that the productivity of homogenous and heterogeneous groups vary situation to situation. There were few points discussed by him given as follows Pre requisites of diversity. The actual definition of diversity is moving away from the traditional homogenous groups to getting together a diverse work group. Diversity and inclusion are complementary to each other. If we don’t have inclusion, diversity cannot be taken care of. First we should talk about inclusive mindset before talking about diversity.
Example- People tend to go to those petrol pumps very frequently where women and disabled people are working.  Because they feel that these people will not cheat them in giving good quality petrol.

He ended his speech with a quote “Equableness is not always inclusivity”. He also talked about how modern organizations experiencing change in their perception of having LGBTQ and PWD (people with disability) in their workplace.

Bindu James Global Head:  Learning and Development / Talent Management and Diversity and Inclusion at Harman connected Services.
Second expert speaker was Ms. Bindu James who talked about the role of unconscious bias in diversity and inclusion.  She has covered few points as followed:

Engagement – employees who perceive bias are nearly 3 times as likely (20% to 7%) to be disengaged at work.

Retention - employees who perceive bias are nearly (30% to 10%) to say that they are planning to leave their job within the year.

Way forward – create, engage, enable and empower
She ended her presentation with the quote “The eyes see only what mind is prepared to comprehend” – Robertson Davis

Amith Prakash- Practice Lead - Enterprise HR Services
The third speaker was Mr. Amit Prakash who started his talk with “Many nations- one team” article published after England won its first cricket world cup. He explained the diversity and inclusion in England cricket team and how it led to the overall team success. He touched upon some important topics as 23% of women employees in 2018 compare to the 32% in 2016. 142 out of 149 Indian bank in the economic opportunity and participation of women index. 68 million women in the workforce by 2025 will help Indian GDP to be increased by $ 770 Billion.

Mr Nikhil Kolur (Moderator) Director- Deloitte Consulting, Bangalore
He moderated the panel discussion and spoke about the need of Diversity as a topic that need to be addressed all over the world and how the companies are working their best to address diversity at workplace and manage it to have a positive impact. A survey done by Deloitte in 2019 found out that 44% of the CEO’s mention SOCIAL IMPACT as the reason of their success. Till 2018 the reason used to be revenues and profits. This shows the importance of diversity. Social Impact consists of Diversity, Inequality (gender based, compensation based, language based etc.), Environment.

Mr Nirmalya Mohanty , ISV director, SAP India
Volunteering feeds his soul and working as a Software Channel Sales professional, earns him his bread and butter. He practices what he preaches by volunteering for 100+ hours each year for the last 5 years. He has worked with tech organizations like Oracle, Salesforce, CustomerXps and currently heads the OEM channels business for SAP in India. While at Salesforce, Nirmalya worked with the Chief Equality Officer's team to launch Ability force (community for different abled) and Outforce (community for LGBT) in Indian offices. With story-telling as his core skill, he has influenced multiple global thought leadership at global events like Oracle Open World and Dreamforce. Nirmalya is also a certified Scuba Diver and participates in debate competitions when time permits.

Dhanya Rajeswaran, Director HR- Accenture Digital, Consulting and Corporate Functions in India
Ms. Dhanya Rajeshwaran talked about the grass route changes is required. Today, manufacturers face a sea change in demographics. A looming retirement cliff and the need to attract younger workers means companies face a two-pronged challenge: retaining the current generation and recruiting the next one. Attract, retain develop and grow are the important HR strategies which work well when diversity is handled wisely. There is a gap between the people who talk about diversity management and people who truly work towards it.

Latha Srinivas - Vice President – HR Anexi
Ms Latha Srinivas focused on the gender diversity in modern organizations. Women’s presence in the workplace is a given, but globally, despite making up 50% of the population, women generate just 37% of GDP.  The panel discussed on the factors influencing the diversity and inclusion. These factors are demographic, multi-disciplinary and cross-functional, knowledge and education, experience, and cognitive Preferences.

It was an interactive session where all got a chance to learn about the role of culture, knowledge and education in inclusivity. The real-time scenarios that were discussed was a great learning for students. They were introduced to real-life examples rather than only being restricted to the theoretical concepts. The event on ‘Diversity and Inclusion - A Business Imperative’ taught us how to manage the workforce diversity and how to increase productivity and engagement through different management practices in todays’ scenario.